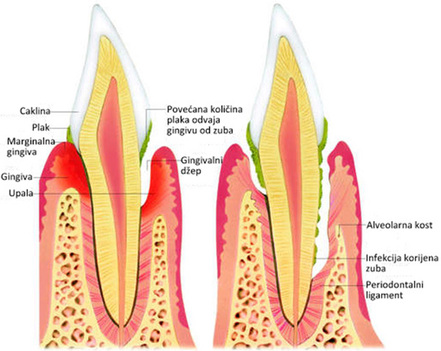 Periodontitis is a severe form of gingivitis in which the inflammation of the gums extends to the supporting structures of the tooth. It is caused from ental plaque that cause s gingivitis. If the gingivitis is not treated it becomes periodontitis.

It's one of the main causes of tooth loss in adults and is the main cause in older people. Infection erodes the jawbone, which holds the teeth in place. The erosion weakens the ligaments and loosens the teeth. An affected tooth may eventually fall out or need to be extracted.Most periodontitis results from a long-term accumulation of plaque and tartar between the teeth and the gums. Pockets form between the teeth and gums and extend downward between the root of the tooth and the underlying bone. These pockets collect plaque in an oxygen-free environment, which promotes the growth of aggressive forms of bacteria. If the disease continues, eventually so much jawbone near the pocket is destroyed that the tooth loosens and could fall out.

Many diseases and disorders, including diabetes mellitus, Down syndrome, Crohn's disease, leukopenia, and AIDS, can predispose a person to periodontitis. In people with AIDS, periodontitis progresses quickly.

The early symptoms of periodontitis are bleeding, red gums, and bad breath (halitosis). Dentists measure the depth of the pockets in the gums with a thin probe, and x-rays show how much bone has been lost. As more and more bone is lost, the teeth loosen and shift position. Frequently, the front teeth tilt outward. Periodontitis usually does not cause pain until the teeth loosen enough to move while chewing or until an abscess (a collection of pus) forms.

Yes. Unlike gingivitis, which usually disappears with good self-care, periodontitis requires repeat professional care. A dentist can clean pockets up to 4 to 6 millimeters deep (1/5 inch) using scaling and root planning, which thoroughly remove tartar and the diseased root surface. For pockets of 5 millimeters (1/4 inch) or more, surgery is often required. A dentist or periodontist may access the tooth below the gum line surgically (periodontal flap surgery) to thoroughly clean the teeth and correct bone defects caused by the infection. A dentist or periodontist may also remove part of the infected and separated gum (a gingivectomy) so that the rest of the gum can reattach tightly to the teeth and the person can then remove the plaque at home. With deep bone pockets bone regeneration procedures can be done, Guided Bone Regeneration – GBR.